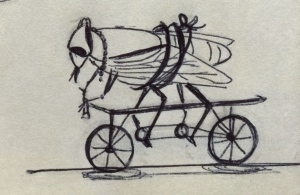 I was peddling along a little over 17 MPH the other day, slight headwind in my face, when I noticed out of my peripheral a little black dot gaining on me. Next thing I know a happy little horse-fly buzzed past, leaving me in the dust. As I was still contemplating the fact that a fat little insect flying into the wind could pass me with such ease it dodged to the left and disappeared across the highway, possibly a hood ornament now….which reminds me, what’s the last thing to go through a flies mind when he hits a windshield?….drum-roll….It’s butt!

Okay, I digress. That joke always made the kids laugh, and me…

“Now there’s a lesson here I thought, but what?” As soon as I got home and showered I googled “horse- fly”, I wanted to see how fast they could fly. Shockingly, one site said they flew up to 90 mph, wow! Some cars won’t even let you go that fast, I’ve tried.  I love nature and the contemplation of it and there is often a lesson to be learned from it. Today what stood out was this, fly’s should not ride bikes. “Well duh, that’s a ridiculous thought!”,  I said to myself.  But then my mind wondered onto this little story.

Of course this is a silly little story but hopefully it will make you smile and at least, think.  Imagine this, if you put a fly on an itsy-bitsy custom fly bike and IF he could learn to ride, he’d still never be able to go the speed he was built to go. Why? Because his strength is in his wings, not his legs.  No matter how hard he pedals he’d still never be able to reach his full potential of 90 mph. Yes, he would be alive and he’d be moving but most likely he’d be sad or angry or frustrated.  He would always have the dream of flying, wind whipping through his hairs.

Now for a true story, although it may seem farfetched.  My first experience with a horse-fly was in high school. For biology we were supposed to collect and identify 100 insects. Of course I loved doing the project and the last bug to round out my collection was a HUGE horse-fly from the dairy farm next door to the school. After two days of being confined in an old prescription pill bottle with a cotton ball liberally doused with formaldehyde, it was time for him to join his fellow bugs on display. Shortly after taking him from the bottle though, he began to move his wings, so back into the bottle he went with for a second, stronger dose of formaldehyde. The next day he was removed again, appearing lifeless. I carefully stabbed him in the back with a long pin followed by his ID tag, common and scientific names, typed on a little piece of paper. He then joined the other 99 insect kebobs neatly lined up on the velvet covered Styrofoam board, completing my collection and assuring me an “A” in the class.

On the way to class I went to the library, accompanied by my bug collection. I laid them on a table and proceeded to go look for a book and ran into a friend. Lost in conversation (quiet of course) I forgot all about my collection until I saw a little black buzzing dot entering my peripheral vision, this time above me. Looking up there he was, Mr. Fly Kebob, hovering over me like a tiny little helicopter. (How he found me or knew who I was I don’t know, that could be a whole different story…). My grade being threatened I had to chase him down, again. He was still a worthy opponent flying with ease through shelves of books, albeit a little slower due to the pin still sticking through his body and his ID tag still attached, with me and my friends running around the shelving trying to head him off and catch him. I finally won but it was with sadness and a new found respect for the little guy that I added him back to my collection. I’ll leave the gory details to your imagination.

So what’s the point? As an artist I relate to both these flies. For years I was like the fly trying to ride a bike. While confined to an office chair, answering phones, filing paper (wondering if it’d ever be seen again) and checking off lists I was dreaming of painting, gardening, sewing, sculpting and playing music…doing art.  Often I felt unfulfilled, sad, frustrated or angry, being told there was no money in art, it’s only a hobby, you have to have a “real” job, nobody will appreciate what you do, etc., etc. Well, like Mr. Fly Kebob I could not be kept pinned down. Through hard work, determination and the faith of my husband, I was eventually freed. Yes, I’ve been stabbed in the back by myself and by others, labeled and pinned down in the past but my wounds are healing, the labels are dropping, paint is flying and I’m picking up speed, all because I am being what I was meant to be, an artist.

Are you a bike riding fly dreaming of the day when you can spread your wings and feel the wind in your face?  Think of Mr. Fly Kebob and how hard he worked to be set free. Be inspired, start flapping your wings and before you know it you will fly!

I am a curious artist who enjoys stimulating dialogue, exploring perspective and relationship in all things art, life (human and animal kingdom alike) and my beliefs...I avoid politics when possible. A little background on this blog--I'd been going to an art group for Christians called The Responding and a few months in I decided to respond--yep, I'm a slow one to respond. About the same time my husband wanted me to illustrate some of his children's poetry, which is far from my style. I was praying about it and woke up with the idea to start doodling responses to my morning devotions and hopefully I'd be able to develop a style that could work for poetry. I decided to doodle through My Utmost for His Highest. At first I started with just doodles, then I decided to add a brief thought response on the back of the card. Then one day I thought, "Why keep these to myself, I'll start a Facebook photo page. Eventually it became this blog. What's planned for the future? When I've doodled through the whole book I plan to do a physical show with them. I will also choose some to develop further and the remainder I will. sell them. All proceeds will go to relieve abuse of all kinds. Currently I'm exploring ministries and orginizations that have credible backgrounds to invest in. More details will be made available as I continue on with this venture. I'm trusting God to lead me. View all posts by kmcgheeart